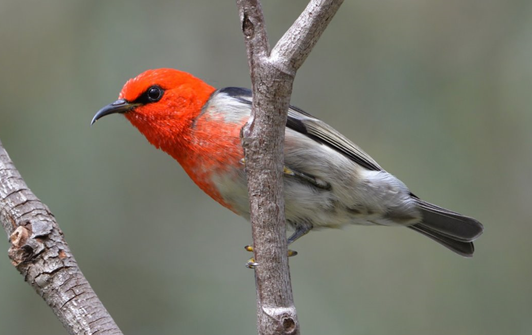 This small honeyeater (about 10 cm) is usually an autumn and winter visitor to the Samford district, with some migrating from the cold of southern states while others possibly come down from the ranges where they breed in spring and summer.

As the name suggests, the male has a stunning bright scarlet head and breast, but can be surprisingly difficult to spot when feeding among flowers of its favoured red bottlebrushes. The female is a much duller brown bird with a russet cast, with pale grey edges to the wing feathers.

This vivacious active bird occupies a range of habitats from eucalypt forest and rainforest to parks and gardens. It feeds mainly on nectar, but also takes insects for protein. It is more often heard than seen, when the male delivers his distinctive sweet tinkling song from high in the canopy, often from an exposed perch. Although usually found singly or in pairs, sometimes small groups will gather at flowering trees, where they are often bullied by larger aggressive honeyeaters.

The small cup nest, which is made from very fine twigs, bark and grass bound together with spider webs, may be suspended from a horizontal branch or in a fork. The female alone incubates the eggs, but both sexes feed the young. Like many of our local birds, they may produce up to three broods per season if conditions are good.