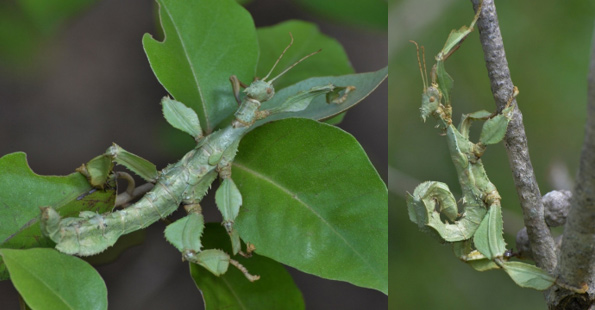 Also known the Giant Prickly Stick Insect, this extremely well-camouflaged phasmid is easily overlooked in the eucalypt or wattle foliage where it usually lives. If disturbed, it will curl up its tail and raise the front legs and mimic a scorpion to deter predators (but it is harmless). Phasmids are related to mantids, grasshoppers, crickets, katydids and cockroaches. Unlike bees ant and butterflies, these groups of insects do not have a larval stage in their life cycle (instead, most young resemble the adults). The Spiny Leaf Insect has some fascinating twists in its life cycle. The flightless female, which can grow to 160 mm,  drops her eggs at the base of trees. She does not need to mate to produce eggs (parthenogenesis), but any hatchlings will all be females that are genetically identical to her. If she mates with a much smaller winged male, the young will be both males and females. The seed-like egg has a special knob (known as a capitulum) that attracts ants, which take it back to the nest. The ants devour the capitulum, but leaves the rest of the egg intact and protect it from being eaten by predators. The egg hatches after spending 1 to 3 years underground and the young nymph resembles a red and black ant. It climbs out of the leaf litter and climbs a eucalypt or wattle tree where it begins to feed on young leaves, turning the usual cryptic colour within a few days. In order to grow to full size the female needs to moult six times in her lifetime and the male five (they hang underneath leaves during this process of ecdysis). The Spiny Leaf Insect is very popular in the overseas pet trade.